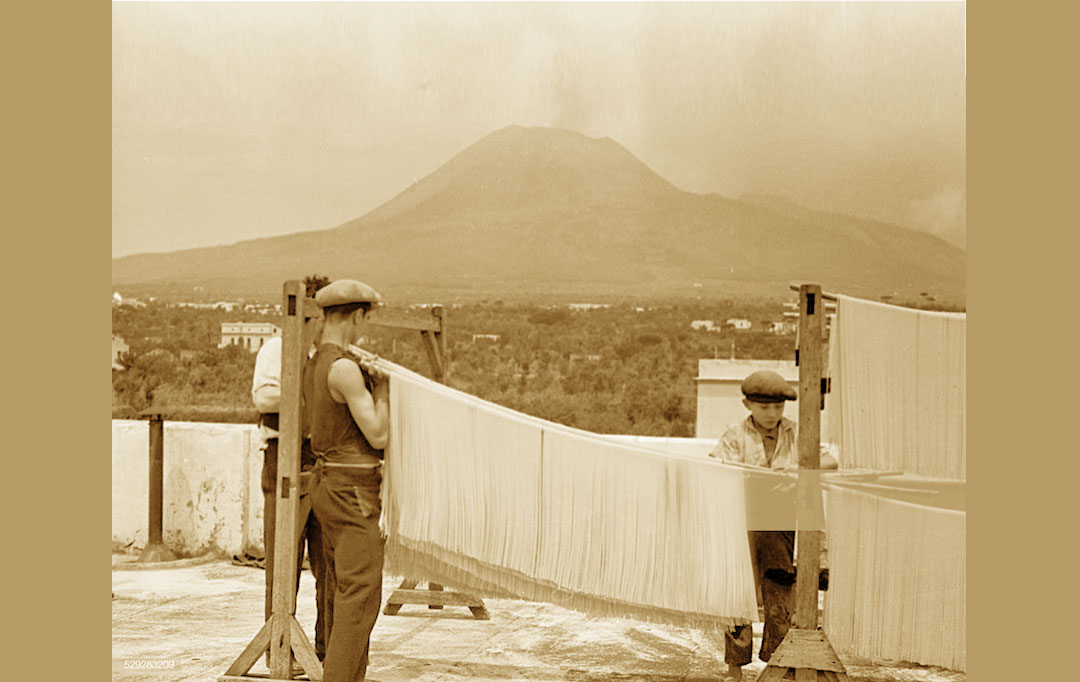 Even today there’s no real answer to who originally came up with pasta. Chinese, Arabs and Italians are first to come to mind among the possible candidates. According to one of the theories, the Chinese knew pasta receipt back in 5000 B.C. Arabs started cooking pasta in 5th century B.C. There is a documented proof of ancient Romans cooking dough with water and baking flour, by frying it, cutting into strips and serving with a sauce.

It’s a fact that in 1292 Marco Polo brought from China to Italy something similar to tagliatelle. However, historians imply that pasta was already widely spread and known in Italy before that. One of the Etruscan tombs depicts tools for making pasta: A bakeboard, a rolling pin, a wheel for cutting pasta are the tools that are used to prepare pasta even today. 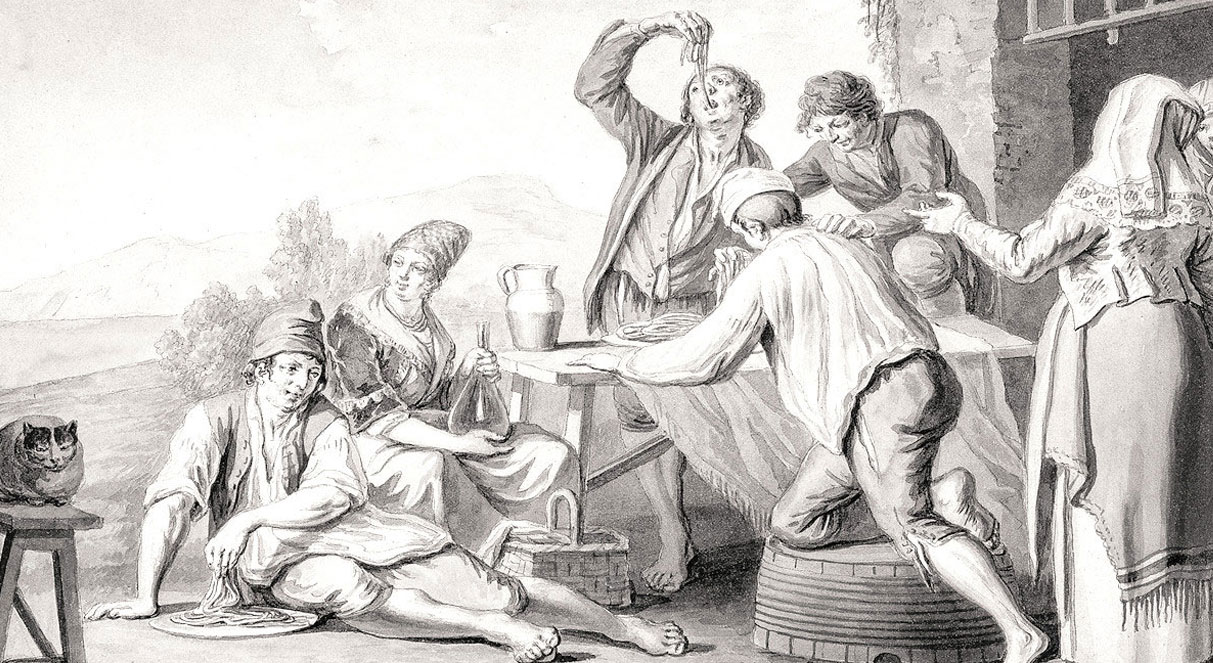 In Sicilia in the 12th century people ate long and thin pasta, reminiscent of modern spaghetti. Meanwhile in Calabria people learned to roll the pasta into tubes. A cooking book of the 13th century that traveled the world before Marco Polo returned from China, describes a few types of pasta including ravioli, vermicelli and tortellini. Pasta presence in Italy before Marco Polo is proven by documents, pictures and engravings in the Pasta Museum in Rome.

During the Renaissance, rich Florentines ate pasta with sugar and expensive spices, the poor however often ate pasta with garlic, cheese, vegetables or without any spices. Back in those days, the pasta was always homemade and fresh. Dry pasta was first practiced in Naples. Apparently, there are perfect conditions nearby the city to grow durum wheat which is used for pasta flour, while the unique combination of wind and sun was great for drying the pasta. Soon Naples was surrounded by factories and pasta production took on the industrial route. First sorts of pasta produced in factories were penne and spaghetti. At the end of the 18th century first pasta factory in Odesa was opened. 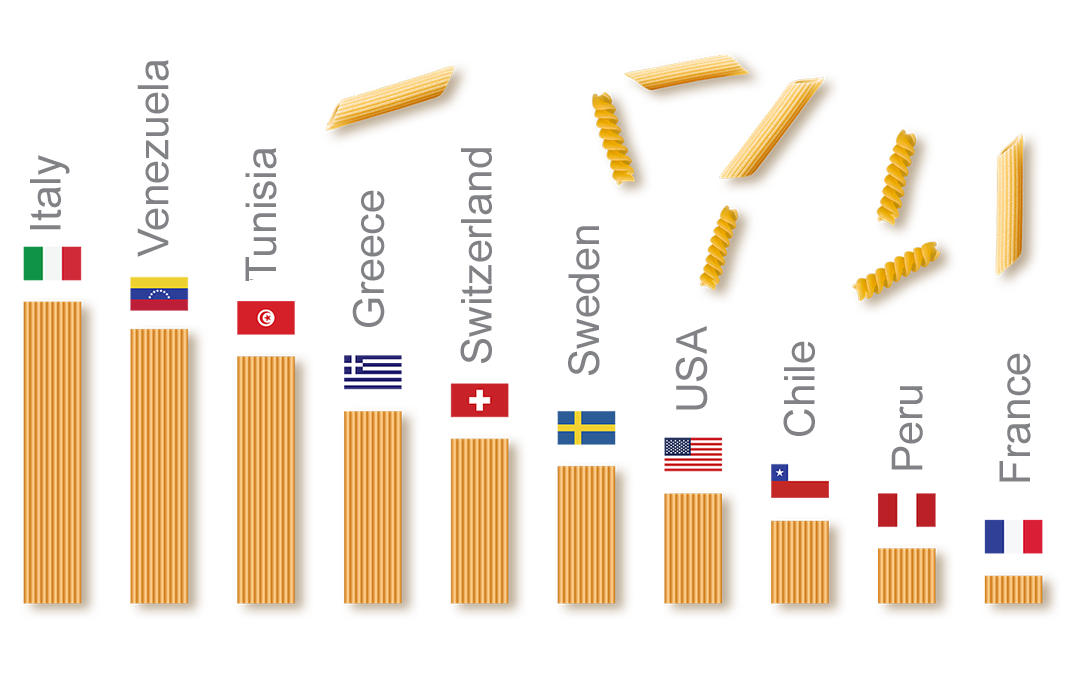 Types of pasta
Today the market offers more than 600 types of different pasta forms. Moreover, their wonderful diversity may vary from classical rolls to tennis racquets. Almost any significant event in the world may inspire manufacturers to create pasta of a new shape.
In shapes and sizes pasta can be categorized in:
Types of cooking pasta can be categorized into 3 groups:
FUN FACTS ABOUT PASTA

In Italy, all “noodle products” are called “pasta” because in Italian it means “dough for noodles”. Classical Italian receipts of cooking pasta include only durum wheat flour.

Pasta is a fairly diet product. One serving of cooked pasta contains roughly 200 calories, 40 carbohydrates, less than 1 g of fat and 1 g of salt. Pasta does not contain cholesterol and is easily digested.

Thanks to the high level of B vitamins group, pasta has a positive effect on mood, it helps to cope with stress and headache. Vitamin E is great for the skin, and complex carbohydrates in pasta decrease the risk of cardiovascular diseases, atherosclerosis and senile memory loss. Fiber makes pasta a healthy dish for people suffering from gastrointestinal diseases.

Italian city Gragnano celebrates the birthday of pasta on November 24. During the last celebration they showed movies with spaghetti as the main star.

The first company to produce ‘Il Pastifico Buitoni’ was founded in 1827 by a woman called Giulia Buitoni. This company exists even nowadays and it’s one of the largest pasta producers in the world.